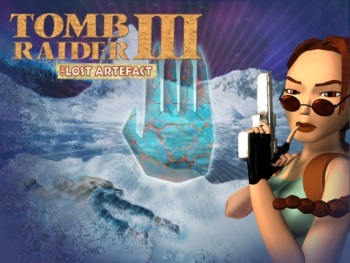 The Lost Artifact note (or The Lost Artefact in International English) is an expansion to Tomb Raider III, included as a standalone, additional chapter in re-releases of the main game.

Having defeated the horribly-mutated Dr. Willard, Lara discovers his wallet, which contains a message about a fifth meteorite artifact. Lara sets off to retrieve it, eventually resulting in a reunion with an old foe.

The game was released in 2000, for PC only, and then later for Mac. Unlike the expansions for the previous games (Unfinished Business and Golden Mask respectively), this one was not made available as a free download to owners of the main game.

Although all the classic Tomb Raider games have now been re-released via various digital distribution sources, this expansion has not.