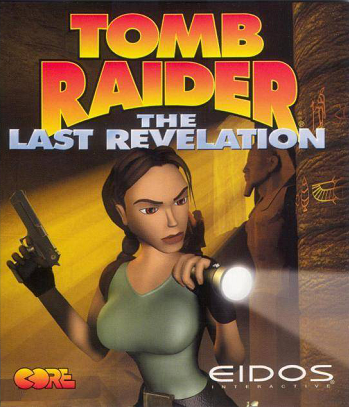 I make my own luck.
Jean-Yves: Be careful, Lara. I fear there are things down there man was not meant to see.
Lara: I am not a man, Jean. And I am always very careful.
Advertisement:

Tomb Raider: The Last Revelation is the fourth entry in the Tomb Raider series. It was also meant to be the last, until fans and Eidos Interactive persuaded Core Design otherwise. The game was released on PlayStation, PC, and Sega Dreamcast in 1999; the next game, Tomb Raider Chronicles, was released next year.

The sequel to Tomb Raider III, it marked a return to Lara's tomb-raiding roots. The story opens with a 16-year-old Lara accompanying Professor Werner Von Croy on an expedition to Angkor Wat, Cambodia, to recover an ancient artifact known as the Iris. Things go awry, and Lara barely manages to escape the collapsing ruins while her mentor is trapped by the Iris' defensive mechanism. Fast forward to the present: a more familiar, pistol-wielding Lara visits Egypt to recover the Amulet of Horus, located in the Tomb of Seth. Turns out this wasn't the best decision; she releases the evil god Seth himself when she removes the Amulet from his sarcophagus, and as the world begins to fall apart around her, she needs to find a way to set things right... as well as deal with her former mentor, now her enemy.

The game was notable for several reasons: it marked a return to Lara's tomb-raiding roots, with far less emphasis on modern civilization compared to the previous game, Tomb Raider III, and focused mainly on exploring long-forgotten, ancient ruins. It was also the first Tomb Raider game to take place entirely in one location (Egypt, save for the tutorial levels), which would not occur again until Tomb Raider (2013), and feature no outfit changes. Other new additions included a remodeled Lara, the removal of the Spinventory, the ability to combine items, and huge, interconnected levels.

Overall, this is generally considered the longest, most complex game in the Core Design line of Tomb Raider games, and is legendary for its difficulty, surpassing even its predecessor, which was already notorious for its difficulty.