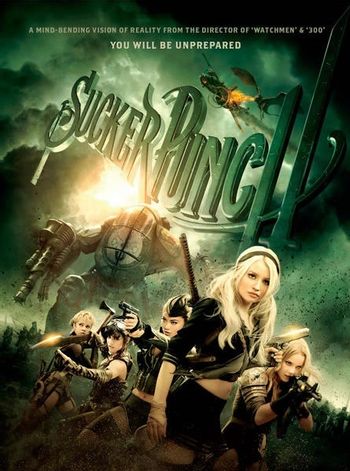 "Sweet Dreams Are Made of This..."
"Reality is a prison.
Your mind can set you free."
Advertisement:

Sucker Punch is a psychological action fantasy directed, written and co-produced by Zack Snyder (his first film not to be an adaptation of any kind), and released by Warner Bros.

It is about a young girl, Babydoll (Emily Browning), and her Fire-Forged Friends. Together, they plan escape from the insane asylum where they're being held against their will. Babydoll can't cope with the trauma of being trapped there, and imagines the asylum as a fantasy world instead. But she can't cope with her fantasy world either... which is when things get complicated.

Not to be confused with the video game company of the same name. For an actual sucker punch, see the Talk to the Fist trope.

open/close all folders
#–C
D–I
K–Q
Advertisement:
R–Z
"You have all the weapons you need. ...now fight."
Feedback

The girls jumping out of a plane onto the battle field where they all land with an awesome three-point land.

The girls jumping out of a plane onto the battle field where they all land with an awesome three-point land.