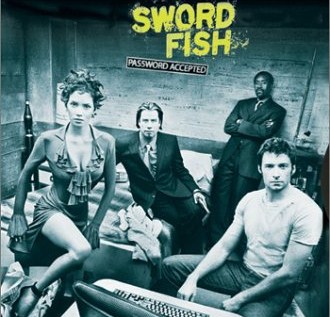 The plot revolves around Stanley Jobson (Jackman), a paroled hacker who is drawn into a complicated Travoltian Gambit Roulette by Gabriel Shear (Travolta) and his beautiful assistant Ginger (Berry). Stanley, in desperate need of money to gain custody of his daughter, agrees to help Gabriel steal money from the government to run his vigilante counter-terrorism unit.

The idea for the title of this movie — although it's not mentioned in the film — comes from the Marx Brothers movie Horse Feathers where one of the brothers is guarding a door, and is told not to let anyone in unless they know the password, which is "swordfish".