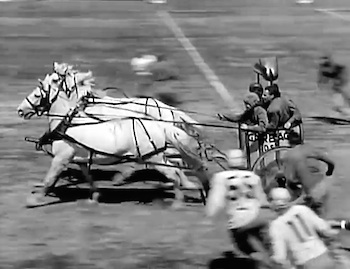 The one where the four Marx Brothers play gridiron football to save a college.

Groucho Marx plays the incoming president of Huxley College, Quincy Adams Wagstaff, while his son Frank (Zeppo Marx) divides his time between attending classes and wooing Connie Bailey (Thelma Todd), the local College Widow. To turn around the school's declining fortunes, President Wagstaff tries to recruit two star football players from a local Speakeasy, but ends up signing the stockboy Baravelli (Chico Marx) and dog-catcher Pinkie (Harpo Marx) instead. Now they have to win an upcoming football game against the rival school, Darwin, who have hired pro ballers as ringers posing as students and recruited Bailey to retrieve the secret Huxley playbook.

The whole thing is, of course, an excuse for the usual Marx family lunacy. It lacked the satirical edge of Duck Soup and the social relevance of A Night at the Opera, but is forever beloved by college professors for its musical statement of administrative purpose: "Whatever it is, I'm against it!" It is also notable for dealing with serious issues of its day, such as the prohibition of alcohol (which ended one year after this film was released) and the rampant corruption in college football, particularly through the use of use of "ringers" (professional or semi-pro players who would be temporarily enrolled at colleges for the sole purpose of playing football)