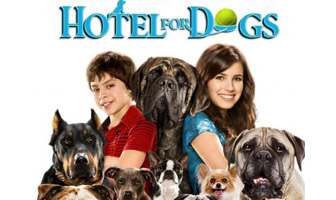 Hotel For Dogs is a 2009 Children's Comedy film from Nickelodeon based on the novel of the same name.
Advertisement:

Orphans Andi and Bruce have kept their dog Friday, the only family member they have left apart from themselves, a secret from every set of foster parents they've had so far. However, there have been many close calls, and on one night after they rescue Friday from the pound, they are forced to hide in an abandoned hotel after being chased by police officers, falsely accused of burglary. They discover that the hotel is already home to two dogs, and in time, they realize that the hotel makes the perfect hiding place for Friday. As a few more teens get involved with what they are doing, they decide that they will take in every stray that they find, and give them a home at the hotel for dogs.

Reception on the movie was mixed, focusing mainly on children's entertainment, and the lack of appeal to older age groups, and the strong impression of Pounds Are Animal Prisons, even having most of the animal shelter employees act in a cocky and gloating manner.