Literature / This Quest Is Bullshit 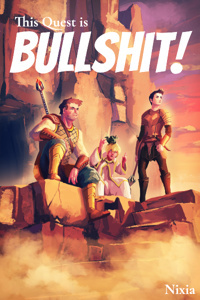 Quest: Head to the next town over and pick up a loaf of bread.
Difficulty: Legendary
Eve: What the fuck?
Advertisement:

The Questing Stones - a mysterious structure that moves from city to city throughout the Kingdom of Leshk. No one knows their origins nor the depths of their power, only that they will bestow upon any of-age citizen before them a Life Quest - the quest that will define their skills and Goal in Life. Some are called to greatness in order to vanquish a great foe, others are tasked to hone a skill to the height of perfection. Some goals are straightforward, while others are complex and convoluted. The possibilities are endless.

For seventeen year-old Evelia Greene, the arrival of the Questing Stones in her town of Nowherested would be the culmination of years of daydreaming. It would be her one chance at breaking away from her boring home life as a seamstress' daughter. Whatever the Stones would throw at her, she was ready to take on - as long as it would let her travel the lands.

Her Life Quest is to obtain a loaf of bread. But the quest apparently has Legendary Difficulty, and she is but a Level 1 Messenger Girl.

While she would never be able to fathom why the Stones would give her such a quest, she knows that the Stones can't be denied; ridiculous or not, she will have her dreams of travel fulfilled and get that gods-dammed bread. After all, how hard could getting a loaf of bread really be?

An ongoing comedy LitRPG trilogy by author J.P. Valentine. Originally written and posted on Reddit as a digital serial, the work garnered enough popularity to have the author publish it as as a trilogy of novels, called This Trilogy is Broken! To date, two out of the three titles in the trilogy have been published.

The titles under the trilogy are as follows:

Both novels are available on Amazon.

This Quest is Bullshit! contains examples of: