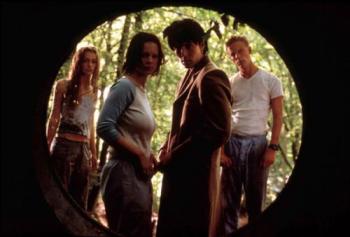 Desperate to get in. Dying to get out.

This 2001 British thriller is about a young woman, Liz, who mysteriously reappears after having vanished from her private school for 17 days. A young psychiatrist takes on her case and finds out a disconcerting truth about what happened to Liz and what happened to the other three students (Mike, Geoff and Frankie) who also went missing at the same time Liz did...

Based on the novel After the Hole by Guy Burt, the film starred Thora Birch as Liz, Keira Knightley as Frankie, Embeth Davidtz as Dr. Phillipa, Laurence Fox as Geoff and Desmond Harrington as Mike.