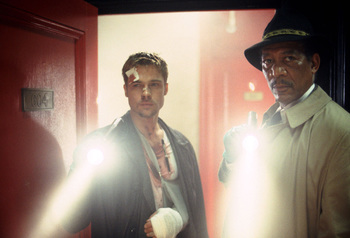 What do you mean, Brad severed his tendon? Ugh, get the writers in here!
Fan on Twitter: I'm so glad they wrote in Hayden's pregnancy in the storyline cuz they couldn't of hid it

Hayden Panettiere: Trust me there was no hiding it!
— A discussion about Juliette Barnes's pregnancy in Nashville
Advertisement:

Occasionally a show's writers will have to work around a very real physical circumstance involving one of the actors, i.e. a temporary medical complaint. Sometimes the character will be Put on a Bus until the actor recovers, but if they're still able and willing to perform, then the showrunners will either attempt to hide the condition or find a way to work it into the story. You may watch your favorite action series and this week the hero gets kidnapped and needs his spunky sidekick to save the day...to hide the fact that the actor broke his leg. Or the soap opera heroine finds out she's pregnant but doesn't know if the baby is her husband's or her secret lover's, because the actress herself is with child.

A subtrope of Real Life Writes the Plot. See also Reality Subtext. When the character is permanently disabled because the actor is permanently disabled, it's Disabled Character, Disabled Actor. If it's a pregnancy, expect either But I Can't Be Pregnant! or Hide Your Pregnancy. The Logical Extreme is The Character Died with Him when the show's writers have to take into account an actor's death.

Pregnancy (when it isn't hidden), of course, is the ultimate Written-In Infirmity: