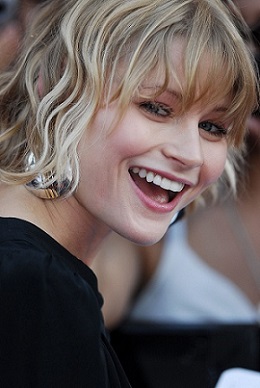 Emilie de Ravin (born 27 December 1981 in Melbourne, Australia) is an Australian-American actress. She is perhaps best known for her roles in television as Curupira on Beastmaster, Tess Harding on Roswell, Claire Littleton on Lost, and Belle on Once Upon a Time.
Advertisement:

She also has a number of film credits. The most prominent are cult favourite neo-noir Brick, the Alexandra Aja remake of The Hills Have Eyes, romantic drama Remember Me and...Santa's Slay with Goldberg as a murderous Santa Claus.

She currently resides in the United States with her fiance, Eric Bilitch, and their two children. She became an American citizen in 2018.

Tropes associated with the actress include: