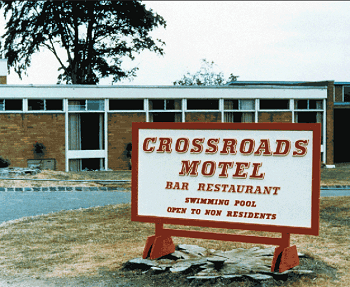 Britain's first daily serial, Crossroads was made by ATV (Associated Television, the ITV contractor for the Midlands) and later its successors Central and Carlton, and broadcast in an early evening slot. It centred on a Midlands motel in the fictional suburb of King's Oak, run originally by Meg Richardson (Noele Gordon), her daughter Jill (Jane Rossington) and son Sandy (Roger Tonge). The vast number of characters over the years included motel cleaner Amy Turtle (Ann George), dour general manager David Hunter (Ronald Allen), chef Shughie Mc Fee (Angus Lennie) and handyman Benny (Paul Henry), a simple country lad who won his way into the nation's hearts. The show was created by Hazel Adair and Peter Ling (who had previously created Compact for the BBC) and first produced by Reg Watson (later to create Neighbours and The Young Doctors).

Much-mocked by comedians and the press for its low budget, cosy format and occasionally unlikely storylines (and memorably parodied by Victoria Wood as Acorn Antiques), Crossroads nonetheless gained upwards of 15 million viewers and was still a hugely popular show at the time of its cancellation in the late 1980s. Various attempts were made during that decade to modernise the show, including the controversial axing of Meg/Gordon amidst a motel fire in 1981. Following this, new sets, locations and characters were introduced in an attempt to update the series, with it increasingly resembling an attempt at a British Dallas or Dynasty as power-suited executives took control of the motel. The final extended episode aired on Easter Monday 1988 and saw Jill drive off into the sunset to open a new hotel in the West Country.

The series was revived twice for ITV afternoon viewing in the early 2000s. Crossroads was now a luxury hotel and a vast expensive new set was built at Carlton's Nottingham studios. Four characters from the original series joined the extensive new cast in 2001, including Jill, but the decision to kill her off early in the run did little to endear the revival to fans and the following year the series was suspended. It later returned as a deliberately camp parody of itself but again, failed to make its mark and, as will be seen below, the entire revival was dismissed as a dream.

Despite its idiosyncracies, Crossroads was decent family entertainment and is fondly remembered by a great many viewers of a certain age.

Cleverly constructed by composer Tony Hatch to reflect the show's title and characters - the two strands of the tune, played on guitar and oboe d'amore, shared the same chords and could be played both separately and together.

Cleverly constructed by composer Tony Hatch to reflect the show's title and characters - the two strands of the tune, played on guitar and oboe d'amore, shared the same chords and could be played both separately and together.