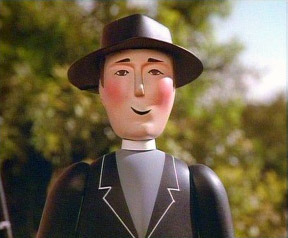 Morning, Father!
"Here's a health to the Anglican Vicar,
And his church without meaning or faith
For the foundation stones of his temple are
The bollocks of Henry VIII."
— Brendan Behan
Advertisement:

British vicars are generally portrayed as docile and gentle elderly chaps, with white hair and little glasses and ever so prim and prissy ways that epitomize British Stuffiness. They take afternoon tea ("more tea, vicar?"), have a tendency to be a bit liberal with the altar wine and don't believe that anything remotely sexual happens ever, despite the fact that Church of England vicars are allowed to marry. So, to be caught in flagrante delicto—or even mistaken for being so—by the vicar is, of course, the second funniest thing ever. Catching the vicar in the act is the only thing funnier.

The opposite of this, now largely a Forgotten Trope due to the decline of the social prestige of the Church, is the Sexy Vicar who appears mainly in nineteenth and early-twentieth-century works. He is young, handsome and idealistic, and often the romantic target of the heroine. He will usually be entirely aware of the lust he arouses in his female congregation, but attempt to deal with things by ignoring it and scrupulously avoiding even the appearance of having favourites. He will eventually fall in love with the heroine, but will still be self-denyingly concerned that she is attracted to him for himself rather than for the glamour of his office, and ready for the tougher aspects of being a clergy wife.

A more recent trope is the "trendy" vicar, who is younger, and probably plays the guitar, but is really just as clueless, especially when it comes to attracting young people to the church. Expect them to make air quotes while using thirty-year-old slang.

For those of you who are non-Brits: Vicar is a term used to refer to a parish priest of the Anglican Church. This is the official established religion of England, a faith that was designed — long, long story — to be Catholicism without the Papal allegiance. Eventually, other aspects of Protestantism immigrated over. Thus the clergy of the Church of England are often called "priests" and dress as such, but nevertheless are free to marry like Protestant ministers.

The word "vicar" technically just means "deputy"; one of the Pope's titles is "Vicar of Christ," for instance. In the Middle Ages, the word 'rector' meant the person that had the right to collect the income of the parish (known as the 'living'), but this could be a bishop, a canon, an abbey, or a pluralist rector with multiple livings. The 'rector' would hire a deputy, the vicar, who was a priest who did the actual work that we associate with ministers and priests. So folks got into the habit of using the term 'vicar' to refer to any 'working priest'note the officially 'done thing' is to call the rector 'vicar' in a parish that traditionally had one, which means the rich important ones that were formerly attractive to pluralist prelates. So, in one of the strange inversions of which British custom is so fond, the originally lower title of 'vicar' is now used by the rectors of the richer and more important parishes., even though today most 'vicars' are really 'rectors'.

Since 1992, women have been able to become vicars. The first woman vicar in England was appointed (despite some serious strugglesnote Which reemerged in the 2010's when female Bishops began to be considered.) in 1994. However, female clergy have been ordained in the Anglican communion worldwide for some time, the first in 1944 in Hong Kong.note There was a substantial break after that, with the next jurisdiction of significance—the Episcopal Church of the United States—adopting the ordination of women in 1976. However, the American Episcopal Church has, ever since the acceptance of the ordination of women, accepted the election of women as bishops, and elected the first female primate—essentially Chief Archbishop of the whole country—in 2006.

In Bonnie Scotland, they will be replaced by the Minister of the local Church of Scotlandnote The established national Church, of which HM The Queen is only a member, rather than leader, as she is with the C of E congregation, who is often portrayed as dour and grim, and generally the opposite of their prim English counterparts. He will frequently be from the isles.

It is usually used in a religious context, but not always; a memorable exception is E.R. Eddison's Mistress of Mistresses, starring an Evil Chancellor known only as The Vicar.

See Nuns Are Mikos, Naughty Nuns, Sexy Priest, and Nun Too Holy for other "subversions" of traditional Catholic clergy.