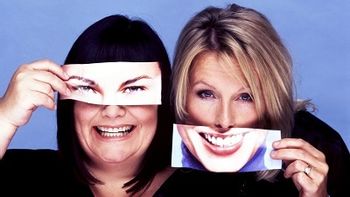 A British comedy sketch show that was widely popular in the late 1980s and early 1990s, French and Saunders was given one of the highest budgets in BBC history to create detailed spoofs and satires of popular culture, movies, celebrities and art. The duo continue to film holiday specials for the BBC, and both have been successful starring in their own shows. French went on to star in The Vicar of Dibley. Saunders won a BAFTA, an Emmy Award and international acclaim for writing and playing the lead role of Edina Monsoon in Absolutely Fabulous, which led to her minor cameo roles in the American sitcoms Roseanne and Friends.