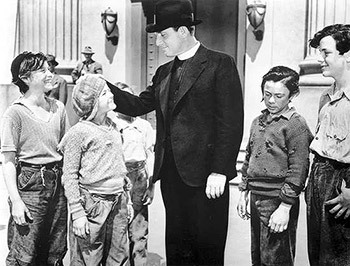 The Good Shepherd is a good priest concerned about his community and the people over all, even if this means being Reassigned to Antarctica by the uncaring or corrupt bishop, being terrorized by the local gang, or becoming a martyr sooner than they ever expected...

Besides spiritual guidance, he may also see to medical needs, take care of orphans and foundlings, and attend to the dying and dead.

He may be a Badass Preacher because as the quote says, wolves come and the flock needs protection. If all his fellows are fighters, they are Church Militant. At the other extreme, he may be an Actual Pacifist, (which is no less awesome), and despite Men Are the Expendable Gender, attacks on him are particulary evil. When he is a military chaplain, he can encompass either type; under The Laws and Customs of War, he is a noncombatant and required not to fight.

The Saintly Church is, of course, replete with them, but even the Corrupt Church may have several — usually low-ranking, with the few Good Shepherds in the higher ranks either attempting to reform the church or being totally oblivious to the sins of his coworkers. Indeed some can be found ministering to the unfortunate of the Wretched Hive. Voluntarily. The downside of them acting as the Good Samaritan is that they have many more people who need help, and indeed, The Hero may find himself needing to give more help than he gets. He may also feature as The Missionary, in which case The Hero may find help in even less likely locations — but again, will be limited in resources. He may also assist as the Turbulent Priest. Regardless, expect him to advocate "God Is Good (all the time)".

Because Good Is Not Nice, he can also be the Dark Shepherd, whether on occasion or frequently. The Preacher Man and your stereotypical Irish Priest is usually a Good Shepherd. Contrast Sinister Minister and Pedophile Priest for the Evil Counterpart.

The word "shepherd", due to various biblical stories, has definite positive connotations in and of itself.

Not to be confused with The Shepherd, though it's not unlikely that there's some overlap. Also do not confuse with the Matt Damon film The Good Shepherd.