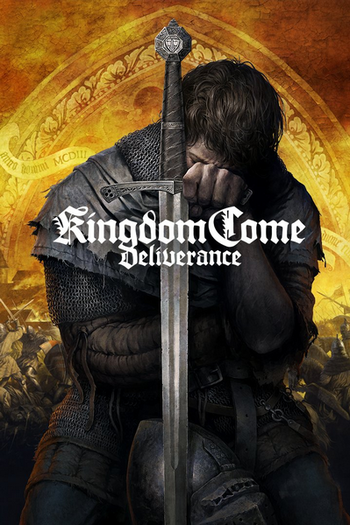 "My home was destroyed, my parents and my sweetheart murdered. I fled like a coward and only survived by a miracle. And when I tried to do the right thing and at least bury my loved ones, I lost the last thing my father left me-the sword he forged for Sir Radzig. But I will never run again, ever! I'll find that bastard who led the raid on Skalitz and kill him. And I'll find that thieving rat who took my sword and run him through with it!"
— Henry of Skalitz
Advertisement:

Kingdom Come: Deliverance is a first-person open world RPG set in medieval Europe. Described by its creators as "Dungeons & no Dragons" and "Braveheart: The Game", it was developed by Warhorse Studios, a Czech studio comprised of industry veterans, including developers of Mafia: The City of Lost Heaven and Mafia II. It was released on February 13, 2018.

The game is set in Bohemia, and follows our character Henry; son of The Blacksmith in Skalitz. This peaceful life however changes when the village is raided by an army of mercenaries, who massacre the inhabitants. Having survived the massacre, and vengeful as it resulted in his parents' deaths, Henry joins the service of Lord Radzig Kobyla as he works his way through the ladders of society.

The game uses a classless system, allowing players to specialize in whatever skill they desire. The gameplay places heavy focus on realism, with layers of clothing for armors and different levels of protections. Equipment, food, and clothing degrade over time, requiring players to keep in tabs with their inventory and repair what's necessary. The game's combat emphasizes physics interactions, with damage depending on the weapon type, speed, and weight of the blow. This, combined with the game's nonlinear structure and quests, give it an Immersive Sim-like quality.

A sequel is also in the planning stages, with development starting after Warhorse is finished updating the game.

Behemoth Comics published a four issue Kingdom Come Deliverance Comic Book series written by Brett Murphy and drawn by Wilson Gandolpho about the events that lead up to the game.

Compare Darklands, a much older RPG based on European history (albeit German, rather than Czech).

You can visit its Kickstarter here

Unrelated to both DC Comics' Kingdom Come and Deliverance.