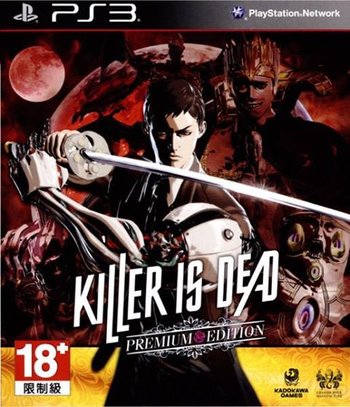 Killer Is Dead is a Hack and Slash Action Game by Grasshopper Manufacture, blending the modern action gameplay of games like Lollipop Chainsaw with a surreal world more reminiscent of Suda51's classics Killer7 and No More Heroes, although the game was actually directed by Hideyuki Shin. The game was released in Japan by Kadokawa Games on August 1, 2013 while XSEED Games released an English version in North America on August 27, 2013.

Set 20 Minutes into the Future, the game follows 35-year-old Badass in a Nice Suit Mondo Zappa: a professional "executioner" commissioned to kill supernatural criminals with his trusty katana and cybernetic swiss-army-arm. As the lead operative of the Bryan Execution Firm, Mondo embarks on a psychedelic story of seduction, revenge and lunacy.