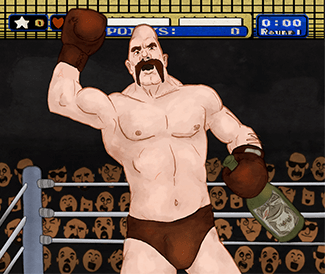 "I can't drive, so I'm going to walk all over you!"
"Drink is the joy of the Rus." note 'Rus' being the early Medieval nation from which modern Russians, Ukrainians and Belarusians originate.
— St. Vladimir the Great
Advertisement:

Glorious Mother Russia. Supposedly, it's the coldest place on the planet, and really depressing. The obvious solution to this problem? Booze — copious amounts of booze. So much, in fact, that there's a good chance that any given Russian character in fiction will be The Alcoholic, or at least will look for the slightest excuse to get drunk. They also tend to see green imps rather than Pink Elephants. And they probably have the stout constitution necessary to withstand intoxication, because Mother Russia Makes You Strong.

Somewhat Truth in Television; alcoholism is a rather large problem in Russia and is a major contributor to high suicide rates and lowered average male lifespan.note Things were so bad at quite a recent point that it was the lowest of any industrialized nation, though there's a lot more to that than booze. Vodka sales were also a prime source of revenue for the Russian government for much of its history, going as far back as the dawn of Tsarist Russia — the first ruler to use alcohol tax as a major source of revenue was Ivan the Terrible. Many bottles of cheap vodka in Russia came with a paper pull tab rather than a screw-top because (like its owner) it's going to be drunk in one sitting. In fact, aftershave is reported to be marketed in recycled vodka flasks so people don't look cheap while drinking it.

Also, this trope is sometimes extended to people in former Warsaw Pact countries, partly as a result of cultural osmosis and partly because life just sucked that much.

Nowadays, though, it is slowly going on its way towards Discredited Trope — not that anyone in the Fictionland has taken the notice, though. Ever since Turn of the Millennium alcohol consumption in Russia is on a steady decline, so much that by some measures Russians now drink less than Brits! This is largely due to the country slowly finding its feet again after Soviet collapse, and the people discovering new things to do with their lives instead of drinking it away, and The Government's easing up on the alcohol tax — since 2000 much of the state revenue came from the oil money, not booze, and in The New '10s other industries have increasingly started to become profitable as well, for which the healthy and sober populace is generally a good thing.note  We're talking a truly dramatic change here - From 2003 to 2017 the average lifespan of Russian men has increased from 65 to 73 years!

This is still something of an uphill battle, and there's the aforementioned Two Decades Behind tendency, so while drinking is slowly becoming unfashionable in real life, we may safely rely on this stereotype in fiction for at least a full decade more.