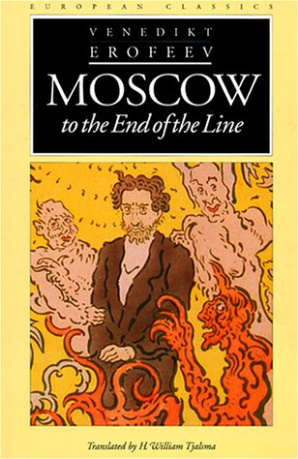 Our cheerful and well-adjusted hero.
"And, suddenly, he started to wave his hands around like a gypsy dancer and then to fumble busily about with his clothing, stripping off his uniform down to his most intimate parts.
Although drunk, I gazed at him in amazement, while the sober citizens around him just about leapt from their seats. And in dozens of eyes was written a huge "Aha!" The people had interpreted the matter quite differently then they ought to have interpreted.
Advertisement:
I should tell you that homosexuality in our country has been overcome once and for all but not entirely. Or, entirely but no completely. Or else, entirely and completely but not once and for all. What do people think about now? Nothing but homosexuality. That and the Middle East. Israel, the Golan Heights, Moshe Dayan. So, if they chase Moshe Dayan off the Golan Heights and the Arabs make peace with the Jews? What will remain in the peoples' heads? Nothing but homosexuality pure and simple.
Let's say they're watching television. General de Gaulle and Georges Pompidou meet at a diplomatic function. Naturally they both smile and shake each other's hands. And then the audience goes: 'Aha.' They say, 'Go on, General de Gaulle!' Or: 'Aha, go on, Georges Pompidou!'
Just like they were looking at us now. Everyone had 'Aha' written in his round eyes."
—Kilometer 85 - Orekhovo-Zhuevo
Advertisement:

The samizdat classic Moskva-Petushki is a comedic prose poem written in 1969 by Venedikt Erofeev; playwright, literary critic, ex-cable fitter, and drunken layabout of the highest order. It was published first in Europe and passed around the Soviet underground to great success, but not officially published in its native Russia until 1989, a year before the author's death of throat cancer.

It was translated into English a few different times under different names (such as Moscow to the End of the Line and Moscow Stations). The author's surname is also spelled Erofeyev or Yerofeyev, to more adequately reflect the pronunciation.

The story follows a Muscovite cable-fitter named Venedikt Erofeev, called Venichka for short, who was recently fired from his job as a foreman for accidentally sending out charts measuring his workers' productivity against the amount of alcohol they drunk that day. The novel opens on the hero waking up at dawn in an hallway somewhere in Moscow, after having passed out from drinking the night before. He immediately sets to what he had been attempting to do the other night before the drunken blackout distracted him - get on a train to Petushki, a small town 125 kilometers from Moscow, where his three-year-old son and love interest await.

So, armed only with a suitcase full of presents (and booze), a choir of guardian angels, and a hangover, our hero manages to catch the train from Kursk Station. From from then on it's simply a matter of sitting, drinking, and making satirical comments on living in Russia during Soviet times. It so happens that forces beyond Venichka's reckoning are conspiring to keep him away from his child and beloved ...