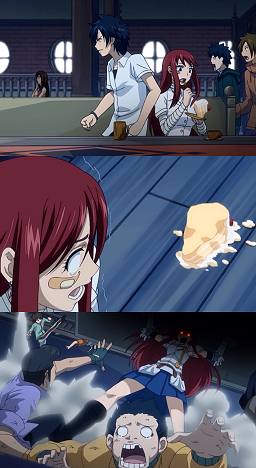 Her one joy...
Frank: Oh... taking Liz's food is not good...
[Flashback Wipe]
Liz: WHERE'S MY MAC AND CHEESE?! [massive table flip]
— 30 Rock, upon a sandwich being stolen from her

A specific form of Berserk Button and/or Trivial Tragedy.

A character is about to sit down to their Trademark Favorite Food, when it gets stolen, eaten, made less appetizing or damaged beyond edibility. No matter how calmly they may ordinarily behave, at this point you can expect them to Gasp!, scream, fly into a rage, start to cry, get excessively violent, some combination of these things, or otherwise Comically Overreact. To them, this particular food is Serious Business.

This is understandable for children, who can treat sweets very importantly, and not much else (see Evil Is Petty for literally taking candy from children). It's also understandable when characters lacking an Improbable Food Budget seeing their hard-bought meal going to waste might be a bit peeved, and also understandable if they are poor and lose the only Poverty Food to fill their stomachs. A Supreme Chef quite naturally wouldn't be pleased with seeing their work destroyed, and any reasonable person could react this way when they're preparing to dine on that chef's Impossibly Delicious Food. And this is completely understandable when enjoying some Comfort Food, or Post-Stress Overeating is involved, since this happening atop other stresses can only end badly. Then there's the whole matter of food offering some sort of tactical advantage. It's when grown adults have a similar reaction to normal food they aren't responsible for that the trope might come into effect.

This can conceivably happen during a Food Fight, Food Slap, Kitchen Chase, Bar Brawl, Diner Brawl, or any time good food is used as Edible Ammunition. Will often be paired with and complement Denied Food as Punishment, Enemy Eats Your Lunch or Filching Food for Fun. It can overlap with Food as Bribe if a character reacts poorly to Their Favorite being indirectly threatened by the ramifications of the plot. This may also result in a Fight for the Last Bite, as nobody wants to be the one to lose their snack.

A Big Eater or anyone Obsessed with Food has a good chance of having this reaction to any of their food being taken away or destroyed. They can still qualify if they flip their lid over a specific food, but the main point is that they become distressed in a proportionately larger way than they would normally.

The eater and complainer aren't necessarily required to be the same person, but the food has to be acknowledged as good-tasting or well-liked by the eater, whether they have Bizarre Taste in Food or enjoy some Foreign Queasine. Situations where a Cordon Bleugh Chef becomes annoyed at a Discreet Dining Disposal happening to something they made distinctly wouldn't count.

This has a tendency to involve confectionery and pastry. Could be seen as an in-universe reaction to They Wasted a Perfectly Good Sandwich. Also see The Alcoholic, for whom wasting is another angry reaction entirely. Compare My Favorite Shirt.