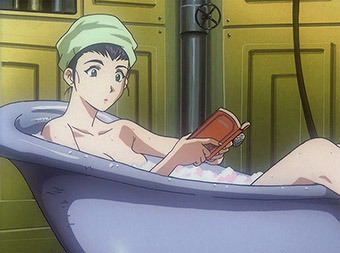 "I would die if I don't bathe twice a day."
— Ponzu, O-Parts Hunter
Advertisement:

A character (most likely female) that seems to enjoy baths and showers a lot and is often shown bathing more frequently than any of the other characters. Like a Neat Freak, she is usually the first to mention the need to bathe when she is filthy. A few of these people are so into bathing that they have no problem bathing in an Awkwardly Placed Bathtub and won't mind that people can see them bathing naked. It is also common that many bathing beauties qualify as Ms. Fanservice.

In anime it's an extremely common fanservice addition to have women be very happy about their bath and utter more or less orgasmic sighs, moans, and words like "lovely" or "this feels so good".

In order to qualify for this trope, the woman must seem to love bathing a lot, have lots of bathing scenes or have some sort of significant or iconic bathing scene.