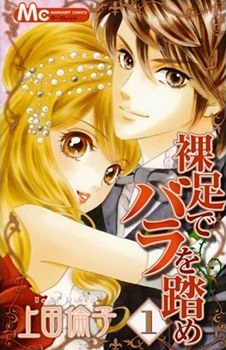 "Back then I never knew what this flower was called... all I wanted was to get a closer look. But this flower would never let me get close to it..."
Advertisement:

Stepping On Roses (Hadashi De Bara Wo Fume, literally translated as "Stepping On Roses Barefoot") is a romance drama manga written and illustrated by Rinko Ueda. Originally serialized in the Shoujo manga magazine Margaret from 2007 to 2012, the series received an English language release starting in April of 2010 by publisher Viz Media.

Fifteen-year-old Sumi Kitamura is the eldest girl in a family of six orphaned children living in Japan during the Meiji era. She spends her days with her younger adopted siblings, doing what she can to care for them in a household with little food and less money to buy it with. Making matters worse is her elder brother Eisuke, a playboy who not only gambles away what little money he manages to earn, but also has a habit of bringing home any abandoned young children he can find. With an ever increasing burden and a family spiraling deeper into debt that she has no means of repaying, Sumi is left with little hope for the future.

These last shreds of hope are quickly dashed when an enraged debt collector bursts into their home one night demanding to find Eisuke, who the man had just caught attempting to seduce his wife. Seeing that Eisuke is nowhere to be found, the man kidnaps Sumi’s younger siblings, declaring that she can have them back when she repays Eisuke’s debt of two thousand yen (the equivalent of three million yen in modern times.) In desperation Sumi decides to sell her body, though she quickly finds that no one is willing to pay such a price. Then she meets a well-dressed and obviously wealthy stranger by the name of Soichiro Ashida, who makes an unusual offer: he will pay her any amount of money she wishes, but in return she must agree to leave her old family behind to become his wife. And most important of all, she'll be entering a marriage of convenience in which love will not be part of the bargain.

What is Soichiro truly after? Will Sumi be able to leave her siblings behind for the new life that he offers? And will she be able to give up on the hope of ever finding true love to ensure the safety of her family?