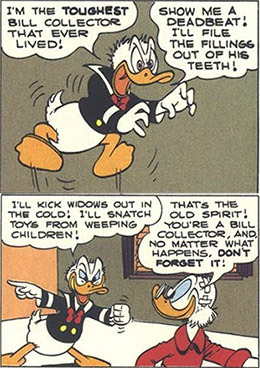 Fear me if you dare! note Also, ducks have teeth?
Advertisement:

They have a proud reputation for being nasty, lazy thugs who think the law is a suggestion and will stoop to any low in order to shake some money out of their "customers." Their stereotypical nature is often the butt of many jokes. Note that for the sake of examples, tax collectors are also included. Prone to making the Harassing Phone Call, as mentioned above. Some collectors in Real Life have even tried to get their targets arrested or imprisoned, even in areas where this is technically highly illegal. Threatening criminal charges is actually a great way to get a collection agency sued, as is threatening a lawsuit when you have no intent to file one any time soon. In fact, at least in the US (as of 1977), under the Fair Debt Collections Act, there are certain types of conduct that, while associated with this trope, are strictly prohibited. (Other countries may have similar laws and regulations.) These behaviors include:

The most common alignment for this trope is Neutral Evil.

This is one of the tropes that gave birth to Dastardly Whiplash.

When a casual loan from a friend causes the lender to transform into this trope, you have Never Lend to a Friend.

Related to Loan Shark and Morally Bankrupt Banker. Older Than Feudalism. A form of Acceptable Professional Targets. Using one of these is a good way for someone trying to Kill the Creditor to be written as sympathetic. Expect this character (especially if they are played for exaggeration) to try to get their money back through a Ridiculous Repossession.