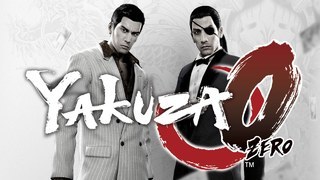 The legend of the Dragon of Dojima has not yet begun.
"When you pick a fight in this town, you'd better pick carefully. Especially when you're carrying a wad of cash."
— Kazuma Kiryu
Advertisement:

Yakuza 0, known in Japan as 龍が如く0 誓いの場所 (Ryū ga Gotoku 0: Chikai no Basho, lit. Like a Dragon 0: The Promised Land) is the sixth main entry and a prequel to the Yakuza video game series. It was released in Japan on the PlayStation 3 and Playstation 4 in March 2015, celebrating the series' ten year anniversary, and in North America and Europe as a PS4 exclusive in January 2017. A port of the game to Steam was later announced at E3 2018 and was released on August 1 of that year; the game was additionally released on Xbox One on 26th February 2020.

The game takes place in December 1988, at the height of Japan's prosperous "economic bubble".

The various factions of the Japanese underworld are jockeying for control over a prime piece of real estate: a vacant lot that is the centerpiece of the "Kamurocho Revitalization Project". Control over this lot will tip the balance of power in the world of yakuza in the favor of whoever claims it.

The game follows two separate protagonists, whose stories revolve around the conflict for the lot:

The new setting for the game offers a view of Kamurocho and Sotenbori unlike what was shown in previous games: the two cities were very different places in the 1980s. This extends to the series' mini-games, as well: Club Sega arcades are replaced with the more time-appropriate Hi-Tech Land Sega (complete with classic arcade games like Space Harrier and OutRun), and hostess clubs are replaced with telephone clubs. The battle system has also been overhauled: each character now has access to three unique fighting styles, and Experience Points are eschewed in favor of using money to purchase upgrades for each character. Enemies now drop piles of cash when defeated; the more brutally they are beaten, the more money they'll drop. Many other avenues for earning money are also available, from gambling to a unique business venture for each character: Kiryu is placed in charge of a real estate agency and must jockey with rival agencies for control over property in Kamurocho, while Majima manages a cabaret club, training hostesses and attending to customers' needs in order to corner the market in Sotenbori.

The prequel setting also offers a fresh perspective on the series characters, showing Kiryu as a hot-tempered youth and Majima before he was driven to insanity, as well as giving insight to characters who only had brief appearances in the first Yakuza game, such as Sohei Dojima, Kiryu's patriarch whose death in the first game set the entire series' events into motion. This, combined with the uniqueness of The '80s setting and emphasis on money, make Yakuza 0 one of the most oddball and unique games in the entire series.

Released after Yakuza 5 and the feudal spin-off Ishin!, the story would continue in the original game and its enhanced remake before returning to the present in Yakuza 6: The Song of Life, the final chapter of Kazuma Kiryu's story.