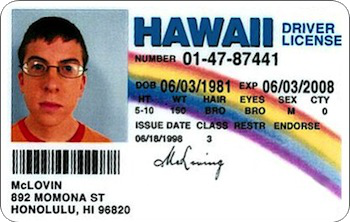 "Alright, you look like a future pedophile in this picture, number one. Number two: It doesn't even have a first name, it just says McLovin!"
Homer: Hello, my name is Mr. Burns. I believe you have a letter for me.
Postal Worker: Okay, Mr. Burns, what's your first name?
Homer: [beat] ...I don't know!
— The Simpsons, "Blood Feud"

This trope is when a character, in disguise or otherwise pretending to be someone else, doesn't know some basic piece of information about the person they're pretending to be. This could be because they didn't research the identity enough, or maybe the disguise and cover identity were done in a rush and they didn't think all the way through.

A quick-thinking character might be able to bluff their way out of the situation, either through a Line-of-Sight Alias, using their Real Name as an Alias, or simply pulling the Bavarian Fire Drill. This can backfire if they say the wrong thing, mess up the Trust Password, or if the person they're trying to fool is already suspicious. Otherwise, Hilarity Ensues as the character either tries to play it straight (i.e., they've somehow ''forgotten'' their first name, birthdate, hometown, etc...) or just tries to awkwardly escape. In drama, this might lead to a tense situation where the character is found out and has to escape without being caught.

Compare Stereo Fibbing, for when two characters have to make up a lie on the spot to get out of this situation.