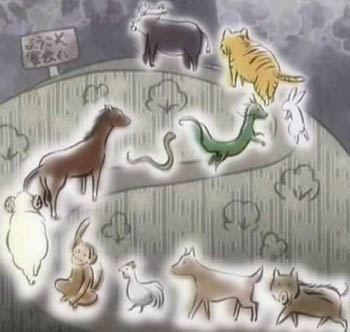 The Eastern zodiac is similar to the western one in that is consists of a repeating cycle of 12 totems that correspond to personality types - the eastern ones are all animals, while the western ones are only partially so (e.g. Aries, Taurus, Leo, Scorpio). The number 12 is one of those numbers often given mythical significance. While the western signs of the zodiac each represent a month, eastern ones each primarily represent a year, though they are also applied to both months and hours. With both types of zodiac, a popular activity is calculating the romantic compatibility between two people.

The Chinese zodiac derives from the Twelve Earthly Branches system which was built from observations of the orbit of Jupiter. Chinese astronomers divided the celestial circle into 12 sections to follow the orbit of 歲星 Suìxīng (Jupiter, the Year Star). Astronomers rounded the orbit of Suixing to 12 years (from 11.86). During the Han Dynasty, the Earthly Branches began to be used to record time and also started to become associated with animals for fun. Stories began to be associated with the zodiac with the most popular one known as The Great Race which tells about how the Jade Emperor decreed that the years on the calendar would be named for each animal in the order they reached him. After Buddhism was introduced to China, the Jade Emperor would be replaced with Buddha in some variations of the tale.

The 12 signs of the Chinese cycle, in order, are: the Rat, the Ox, the Tiger, the Rabbit, the Dragon, the Snake, the Horse, the Sheep, the Monkey, the Rooster, the Dog, and the Boar/Pig. (The Cat missed out on the Chinese Zodiac alternately because the Rat purposely gave it the wrong meeting time, or because the Rat pushed it off the Ox into the river during their crossing.note In Vietnamese Astrology, the Cat is indeed included, but takes the place of the Rabbit instead probably due to a translation error as the Chinese word for 'rabbit' sounds a lot like the Vietnamese word for 'cat'.) They are governed by the 5 Eastern Elements. Earth, being the central element, governs all the signs but chiefly the Dragon, Rat, and Ox.

The Tiger and the Dragon are commonly regarded as the two most powerful signs, but since There Can Be Only One, the two are Arch-Rivals. Other rivalries and affinities also exist, however - for example, two Tigers rarely get along.

There are other methods to classify the signs, all of which can be used together. These include polarity (yin/yang), power and romance, and trine (four in total). Unlike the elements, these repeat through the 12 as yang/yin and first/second/third/fourth - the first sign, Rat, is a yang sign in the first trine, while the eighth sign, Sheep, is a yin sign in the fourth trine. In addition, each pair of consecutive years corresponds to a specific element, which also affects a personality reading - an Ox is typically seen as stern and inflexible, but a Water Ox (1973) or Wood Ox (1985) will be seen as more flexible than a Metal Ox (1961) according to a simple reading.

The above listed is the Chinese Zodiac, and this is the one most familiar to most Western and Eastern audiences alike as well as being the original one, but other Eastern zodiacs exist. The Korean and Japanese are functionally identical to the Chinese Zodiac, with changes primarily in nomenclature. The Vietnamese zodiac, however, replaces the rabbit with the cat (a pity Kyo wasn't born there), and the Thai zodiac replaces the dragon with the naga.

For a more in-depth look at the animals of the Zodiac, see The Analysis page.

For tropes on the animals themselves, see: