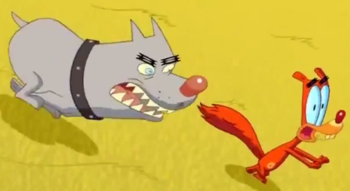 Do note that not all dogs are this nutty for squirrels.
Gidget: Friends, I'm afraid that I have some terrible news!
Mel: The squirrels are going to take over the world! I knew it! I always said, "squirrels are shifty little guys!"
Gidget: No, we're not doing the little squirrel thing right now, that's not—no!
— The Secret Life of Pets
Advertisement:

Forget cats. If there's one animal dogs seem to despise more than anything, it's squirrels. Often a dog will be minding its own business. But the moment it sees or even hears a squirrel, it'll go NUTS and chase after it. It's like they are instinctively driven to go after them. It's one of many common Animal Stereotypes.

For a squirrel, Beware of Vicious Dog ensues.

This isn't just done with regular dogs. Across media, it seems to affect dogs all over the Sliding Scale of Anthropomorphism. Whether you're dealing with a Nearly Normal Animal, Talking Animal, Partially Civilized Animal, Civilized Animal, or sometimes even Funny Animal, dogs just can't seem to stand squirrels in media, because Predators Are Mean. Often the more sapient the canine and/or squirrel, or in case they are giant dogs and giant squirrels, the more exaggerated the chase gets.

Often Played for Laughs. When you have a canine character or pet dog in the cast, what better filler joke than having them turn savage and run through everything in sight just to catch a squirrel?

This trope also serves as a common Furry Reminder for dogs. Afraid that your supposedly, mostly normal dog is getting a bit too human-like? Have a squirrel run across his path and watch him be humbled as he goes after it. At other times though, the trope isn't be used as just a quick gag. Sometimes, this is employed as a way to separate a dog from his companions or get a pooch into trouble. Sometimes the very dog-squirrel conflict becomes the center point of the story, in which the squirrels tend to be on the side of the good and dogs are portrayed as villains. Sometimes the squirrel will be just going about their own errands, searching for acorns and what not, only for a big, mean old dog to turn into a Super-Persistent Predator to get in their way. On the other hand, the dog's hate for the squirrel may be justified by having it be tormented by a Screwball Squirrel, in which case it better watch out.

A Big Friendly Dog or a Precious Puppy usually doesn't exhibit this trope, unless when they're pissed. Due to their generally likeable nature, they are more likely to spare poor squirrels from outright brutality compared to other dogs.

As far as real life goes, this is indeed Truth in Television, but not to the absurd extent fiction loves to play it up. Many dogs do indeed chase squirrels on sight. But such dogs likely won't pursue a little squirrel anymore than any other small animal. Dogs are indeed predatory carnivores which share a good chunk of their DNA with wolves and foxes. Chasing little animals for them is practically instinct.

As a side note you might notice that this trope is far more common in Western media than Eastern media. That's because urban squirrels are much rarer in the East than they are in Western nations so the people naturally aren't as familiar with the idea.

See also Elephants Are Scared of Mice for the similar interactions between rodents and larger mammals.