Elephants Are Scared of Mice 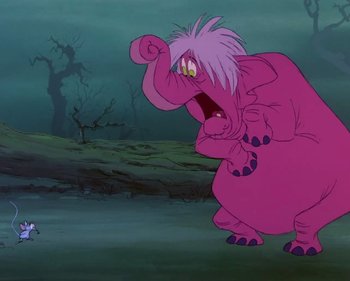 They hate the mouse worst of living creatures, and if they see one merely touch the fodder placed in their stall they refuse it with disgust.
— Pliny the Elder, Natural History
Advertisement:

It is a common belief that elephants, the largest land-dwelling mammals on Earth, are terrified of mice, some of the very smallest. This often takes the form of elephant characters sharing a chronic phobia of small rodents, flying into panic at the mere sight of them. This also tends to be treated as something comical and absurd, as the elephants' phobia is seen as ridiculous and senseless (though that's probably a bit hypocritical coming from us spider-fearing humans).

There is, however, some real-life basis for this trope. Elephants are not extremely agile animals, and are not flexible enough to see what's going between their feet with their poor vision and herbivore-oriented eyes (since they don't need to chase prey, their eyes are on the sides of their heads so they have a better chance of spotting predators); they may be aware of another presence in the area but struggle to keep track of what's actually there, how it's moving or what it is doing. Thus, if they feel another creature moving around between their legs, they tend to panic out of an abundance of caution, in case the "mouse" is actually a more dangerous threat, such as a poisonous snake. However, if they could see the other presence clearly, they likely won't get startled.

This trope is often parodied, explicitly mocking the tough, powerful creature's senseless fear of something so tiny. It's also very commonly exploited, with non-elephant characters producing mice in order to scare off or distract antagonistic elephants. This tends to be Played for Laughs if both the mice and elephants are decent animals meeting each other.

Subtrope of Eek, a Mouse!!. See also Absurd Phobia and Animal Jingoism. In cases where the mouse or rat can actually harm the elephant, this will likely overlap with David Versus Goliath (usually Resourceful Rodent and Cruel Elephant, or Honorable Elephant and You Dirty Rat!). War Elephants may or may not be affected, depending on the situation in question; more serious works are unlikely to even bring this trope up, but more comedic ones may very well feature the strategic use of mice to send herds of armored war elephants stampeding away.