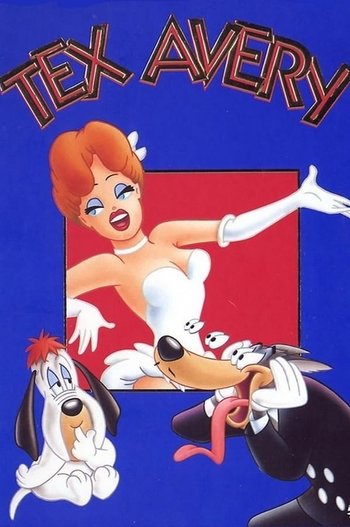 Sammy Squirrel: My cartoon would have been cuter!
Screwy Squirrel and Meathead and their Offscreen Teleportation doubles together: Oh, brother! NOT THAT!
(cue Big Ball of Violence)
— the ending of Screwball Squirrel
Advertisement:

After quitting Warner Bros. Cartoonsnote then named Leon Schlesinger Productions in 1941 following a squabble with Leon Schlesinger, director Tex Avery was hired by the MGM cartoon studio to give them something to offer the public aside from Harman and Ising's cutesy one-shot shorts or Hanna and Barbera's newly-launched Tom and Jerry series.

And to say he succeeded with flying colors would be an understatement.

Free of the budgetary and creative constraints he'd faced at Warners, and with a staff of skilled animators (some of whom were even ex-Disney employees) at his side, Avery went on to make some of the funniest and most acclaimed cartoon shorts of The Golden Age of Animation, if not of all time. From 1942 to 1957, he cranked out dozens of classics, many of which would codify the Zany Cartoon and thereby serve as an influence on countless followers, including master animator Richard Williams and Ren & Stimpy creator John Kricfalusi.

Syndicated reruns of the shorts on UHF stations during The Dark Age of Animation and on various Turner networks (including TBS, TNT, and most notably, Cartoon Network) during The Renaissance Age of Animation cemented their popularity in the lexicon of pop culture and helped them influence future generations of cartoonists and cartoon enthusiasts.

in February 2020, followed by another

Tanner does the Tiger Rag

On a few MGM cartoons from 1942, Tanner the Lion roars in sync to the background music, "Tiger Rag".

Tanner does the Tiger Rag

On a few MGM cartoons from 1942, Tanner the Lion roars in sync to the background music, "Tiger Rag".