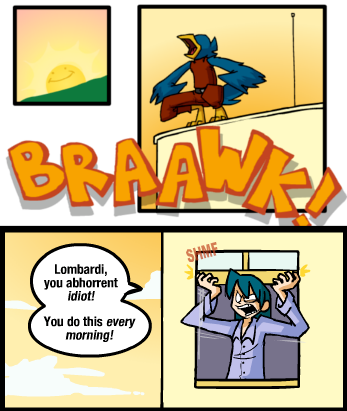 The worst part is he's not a rooster (or even a falcon).
"SOMETIMES, THEY'RE DINOSAURS."
— Alt text for This

So, we have an anthropomorphic animal who acts just like a human. Stands on hind legs, talks, interacts with humans just like he's one of them, they treat him just like a human... it seems the only difference between him and a human is that he has fur and a tail. But then, when the audience has forgotten what he is... he does something that's actually animal-like! If he's a dog, he might suddenly stop what he's doing to chase a car, if he's a cat, he might happily give someone a dead mouse.

Sometimes, the Furry Reminder is a consistent occurrence, such as a character with an Animal Species Accent.

This trope is most common with animals on the Civilized Animal and Funny Animal tiers. This can sometimes happen to animals on the Nearly Normal Animal, Talking Animal, or Partially Civilized Animal tiers, but animals of those tiers move around like their real life counterpart, tend not to be treated like or act like humans, and don't seem to be prone to Furry Denial or "purely aesthetic species" syndrome. On the other hand, a Beast Man would tend not to do it since they're treated more like human with animal features than an anthropomorphic animal. If a Cat Girl or other Little Bit Beastly drops a furry reminder, it tends to get jarring as they look completely human aside from their animal ears and tail.

This trope doesn't necessarily involve an Anthropomorphic Shift, but can sometimes be applied after a shift has occurred to remind us that the character is still as much an animal as he was before.

There is a variant of this trope involving stuffed animals and toys, especially those that seem more like actual living things to viewers, that reminds viewers that the character or characters are in fact stuffed or toys. The most common example of this involves either an arm or leg getting ripped or ripped off or part of their body getting a rip in it.

If he's trying to hide the behavior, but it accidentally comes out, it's My Instincts Are Showing.

This is a furry reminder, reminding both the audience and the characters what species a character really is. Contrast Furry Denial. Contrast Furry Lens, which due to treating the animals as "humans in animal costumes" naturally avoids furry reminders. Compare Anthropomorphic Zig-Zag and Werewolves Are Dogs (for a mythical being). The toy and stuffed animal variant occurs most frequently on toys on Levels 4, 5, and 6 and sometimes on Level 3 on the Sliding Scale of Living Toys.

Rouge is found dangling on the cieling like non-anthropomorphic bats.

Rouge is found dangling on the cieling like non-anthropomorphic bats.