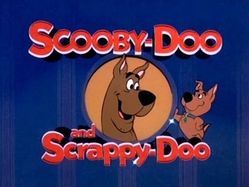 The year was 1979. The old Scooby-Doo formula was getting old, and ABC was looking into other shows to fill in its slot instead. But...Hanna-Barbera had one last trick up their sleeves. So, maybe for worse, maybe for better...they introduced Scooby's nephew, Scrappy-Doo, to the formula.

Scooby-Doo and Scrappy-Doo ran from 1979 to 1980. Afterward, it was retooled into a “Three Shorts” format, which carried on for three seasons from 1980 to 1983. The entire season can be found legally by digital download and was released on DVD in 2015.