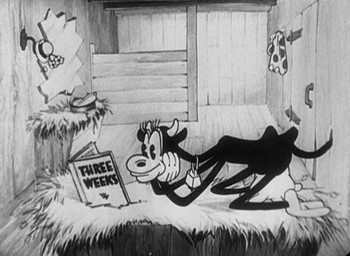 Like the Nearly Normal Animal, Speech-Impaired Animal, and Talking Animal, the Partially Civilized Animal is very much an animal when it comes to thought processes, personality, instincts, priorities, and motivations. They are more frequently depicted as just walking on four legs than on walking on two legs or walking both ways. Like the Civilized Animal, they may wear a few accessories or articles of clothing (often in pantless fashion), often have some sort of Mouse World, and can be anywhere on the Sliding Scale of Animal Communication.

This is between the Civilized Animal and the Nearly Normal Animal, Speech-Impaired Animal, and Talking Animal on the Sliding Scale of Anthropomorphism.