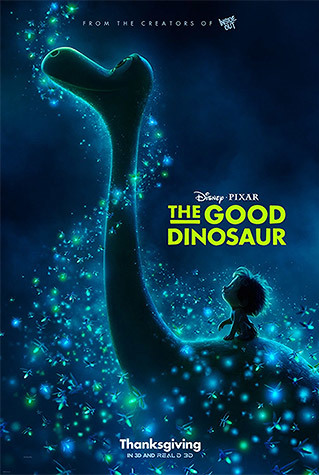 The Good Dinosaur is an American 3D computer-animated film produced by Pixar Animation Studios and released by Walt Disney Pictures. It was released on November 25, 2015 as the studio's sixteenth feature film. Infamous for its Troubled Production, which resulted in the original director, longtime Pixar writer Bob Peterson, leaving the project due to story problems and being replaced with fellow regular Peter Sohn.

Set in an Alternate Universe in which the dinosaurs never went extinct, the film follows Arlo, the youngest of a family of Apatosaurus farmers living in the shadow of the Clawtooth Mountains (Wyoming's Grand Tetons). One day when he's chasing after a "critter" - a human child - who's been eating from the family's food stock, Arlo falls into the river and is swept away by the current. Now Arlo, accompanied by the human boy, whom he names Spot, has to face his fears as he makes his way through the wilderness to come back home.

For the other major Disney film revolving around dinosaurs, which in contrast to this fully CGI film stars CGI animals in real-life backgrounds note we know the CGI is really good in this film, but it's not real backdrops!, see the page for Dinosaur.

The Good Dinosaur played in theaters along with Pixar short Sanjay's Super Team.

The Good Dinosaur provides examples of: