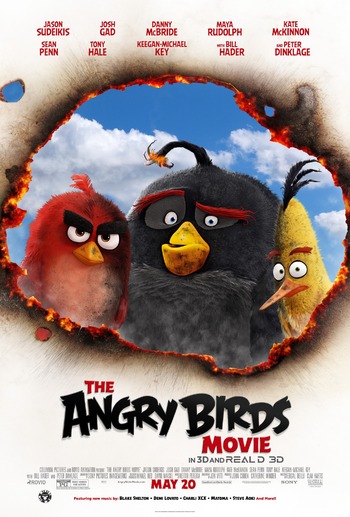 Why so angry?
Advertisement:

The Angry Birds Movie or Angry Birds is a 2016 CGI animated film based on the Angry Birds franchise. It was produced by series developers Rovio Entertainment, animated at Sony Pictures Imageworks, and distributed by Columbia Pictures.

The movie is a prequel to the game series, telling how the fight with the Bad Piggies started. On an island filled with optimistic, happy-go-lucky flightless birds, Red is the only one who is constantly irritated and grumpy, making him a social pariah. But when a small army of pigs sail over the seas with a devious plan to take the birds' eggs — much to the obliviousness of most of the birds on the island — it's up to Red and his friends from anger management class to stop them.

was released on September 23, 2015, and the official trailer

A sequel was announced on September 2016. In May 2017, it was announced that Mark "Thurop" Van Orman (The Marvelous Misadventures of Flapjack) would serve as director on this sequel. It was released on August 13, 2019, coinciding with the tenth anniversary of the original game.

In meanwhile, 3 series based on the movie premiered on ToonsTV (later moved to the Angry Birds YouTube channel

). Angry Birds Blues, which is set after the movie's events and centered around The Blues and their hatchling friends, and the third and fourth seasons of Piggy Tales entitled Third Act and 4th Street, where the movie's Minion pigs respectively perform their antics in the theater and goofing around the streets of Pig City.

Not to be confused with the Real Trailer, Fake Movie Angry Birds: The Movie.

The Angry Birds Movie has the following tropes: