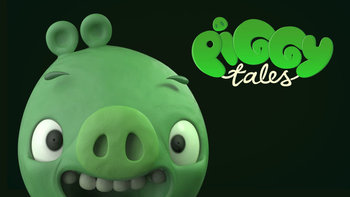 Piggy Tales is a CGI-Claymation animation mini-series based on Bad Piggies, a spinoff of Angry Birds, and is the second series created in the franchise, after Angry Birds Toons. With the birds completely absent from this seriesNote Although there's a few nods to their appearances and even a full-blown cameo in one episode , it follows the misadventures of the minion pigs, who tend to be goofing around, following orders, having a competition with each other, doing anything stupid... Well, you name it!

The series premiered in April 2014 and ended in May 2019 with a total of 4 seasons and 122 episodes. It also has unique setting starting from season 2 onward. The series could be viewed on ToonsTV until its closure in 2017 and on YouTube, as well as Netflix alongside other Rovio series through compilations.