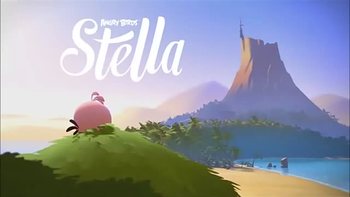 Angry Birds Stella is an CGI animated series based on the Angry Birds Spin-Off game of the same name and is the third series created in the franchise, after Angry Birds Toons and Piggy Tales. It features the titular Girly Girl pink bird and her friends Poppy, Luca, Willow and Dahlia, as well as her former friend-turned-enemy Gale and her army of Bad Piggies. Each episode is six minutes long.

The series premiered on November 1, 2014 and ended on March 11, 2016, with a total of 2 seasons and 26 episodes. Like Angry Birds Toons, it could be viewed in some of Rovio's apps as well as ToonsTV until it was shut down in 2017, moving the series as well as Toons to the official Angry Birds YouTube channel

. It is also available on Netflix through compilations alongside Toons and Piggy Tales.

Luca runs away so that he can play in the mud.

Example of:
The Runaway

Luca runs away so that he can play in the mud.