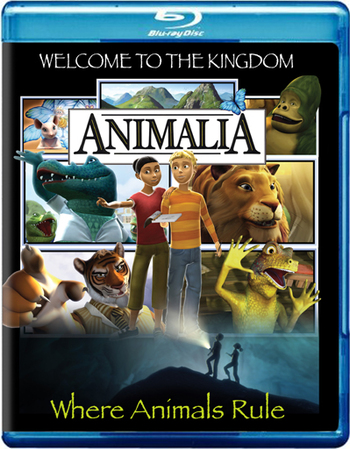 Animalia (2007-2008) is an Australian children's television series based on the 1986 picture book of the same name by illustrator Graeme Base.

The story involves two kids, Alex and Zoe, who happen to find a portal while visiting their town's library. This leads them to an alternate world named Animalia, populated with Talking Animals who are able to live in peace and harmony thanks to an artifact called the Core. However, the Core happens to suffer some kind of illness, resulting in it losing pieces regularly. Each piece has a specific function in Animalia's inhabitant's abilities to talk and act like humans, and losing a piece will inevitably provoke a weird side effect on everyone until the piece is put back in place. Being humans, Alex and Zoe are immune to those effects, resulting in them being in charge of collecting the pieces each time one is lost. They are assisted in this mission by G'bubu, a green gorilla, and Iggy, an Iguana.

The series mostly consists of a Piece of the week scheme, each episode usually involving a missing piece of the Core and Alex and Zoe trying to find it. Season 2, however, goes for a slight Cerebus Syndrome by introducing a new villain, the Creeper. Unlike all characters portrayed before, the Creeper was a legitimately evil character, and caused the series to get a bit darker.

Example of:
Trapped in Another World