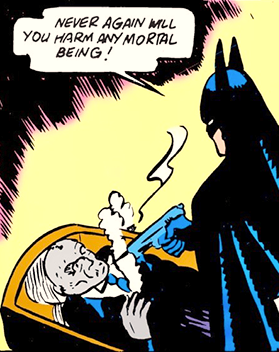 Years later, Batman realized that he doesn't kill and that he hates guns. note Granted, it was a vampire, but it still counts.
"As a first season, especially the earlier episodes, there were a lot of goofy ideas that were put in because they were still finding out their place and how they wanted the show to work."
— Linkara (discussing Mighty Morphin' Power Rangers), History of Power Rangers
Advertisement:

Long-running series often have to experiment a little before they find their niche: sometimes there are concepts abandoned early on that were fascinating, either because they were potentially good ideas back then, or they just clash so much with the later tone of the series. In short, the first installment is a "prototype", like a pilot of a first episode.

This is particularly common in television, where the pilot episode is usually filmed long in advance of a show's actual debut. This gives the studio and creative team a chance to evaluate what worked and what didn't and make significant changes, including replacing cast members. In particularly dramatic cases, a series can undergo something of a Retool between its pilot and its second episode.

If the series improves after abandoning these elements, it often leads to a Growing the Beard moment. For something similar applied to individual character personality, see Characterization Marches On. A specific sub-trope of this dealing with early installments resembling the real world is Earth Drift. When early characters disappear entirely with no explanations, that's Chuck Cunningham Syndrome (or even Dropped After the Pilot, if it happens in the very first episode). Might be the result of Plot Tumors, Art Evolution and/or Early Installment Character-Design Difference and Continuity Drift.

There will always be some fans who view the current incarnation of a series as They Changed It, Now It Sucks!, but it also must be said that weirdness in this case isn't necessarily a bad thing. Plenty of ideas get scrapped in the natural course of a series, some of them perfectly good. Early Installment Weirdness might be synonymous with a time when a plot was more laid back, experimental, pre-Executive Meddling, pre-Flanderization, or any number of other things.

When this happens to themes that become popular after the fact because of a work, and are only actually codified elsewhere, it is a subtrope of Unbuilt Trope.

Compare New First Comics, Lost in Imitation, Early Installment Character-Design Difference, My Real Daddy, Breaking Old Trends, Adaptation Displacement, and Early Adaptation Weirdness. Contrast First Installment Wins and Later Installment Weirdness. When a character displays this, it's Characterization Marches On (or Flanderization, when it essentially happens in reverse). May be the Oddball in the Series. This is very commonly found in works that were released before a Franchise Codifier. Often the cause of an Artifact Title. See also Meet Your Early Installment Weirdness. If a piece of weirdness sticks around despite no longer fitting, it's usually The Artifact.

A special note: In video games, this is often the counterpart to Spiritual Successor. A series may evolve in a drastically different direction from its first installment in a technical sense, abandoning core gameplay mechanics or changing them in drastic ways, while retaining the setting (general background lore, characters, etc.), although elements can be added or retconned. This can happen if the developer for an intellectual property held by a publisher changes or merely if a developer wishes to keep a recognizable, established IP, but adapt to a new player demographic or emulate gameplay seen in another revolutionary title. Such changes result in an early installment weirdness when the sequels are compared with the first installment. In contrast, a game which tries to imitate a forerunner title mostly in gameplay terms (copying/refining particular "revolutionary" aspects, the entire gameplay or just the general "feeling" of the game), but is not part of the forerunners' IP, e.g. if the rights to the IP are held by a different publisher, and so uses a different setting, it's usually a Spiritual Successor.