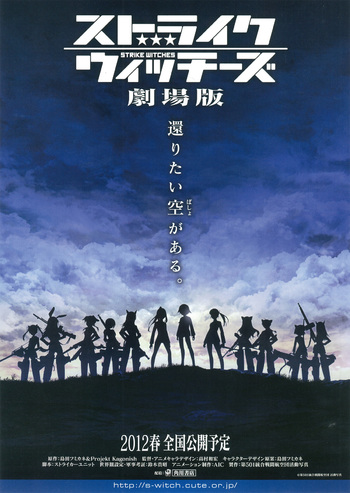 Strike Witches: The Movie is the first film in the World Witches franchise and a direct sequel to the Strike Witches series. It is directed by Kazuhiro Takamura, and written by the Striker Unit team, consisting of Takamura, Tatsuhiko Urahata, Takaaki Suzuki, Kenichi Yatagai and series creator Fumikane Shimada, with a soundtrack by Seikou Nagaoka.

Picking up two months after the events of Strike Witches 2, the film follows Ensign Yoshika Miyafuji as she goes on a trip to Europe for her medical studies, accompanied by Sergeant Shizuka Hattori. However, they must fight yet another Neuroi invasion.

The film was first released in Japan on March 17, 2012. It is chronologically followed by Strike Witches: Road to Berlin and by Brave Witches in production order.