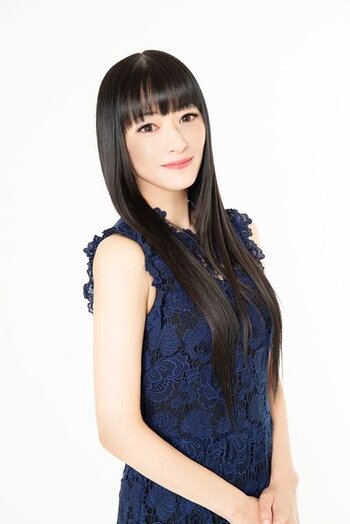 Rie Tanaka (born January 3, 1979) is one of the most well recognized seiyuu among the industry. Because her vocal talents allow her to voice a diverse range of characters, she is capable of playing the roles of subservient women, idealistic women, badass women, sadistic women, clueless kids, and Yomi. While she was initially not that well known early in her career (through Chobits), Mobile Suit Gundam SEED certainly shot her to extreme fame with her role as Lacus Clyne, one of the most popular characters in anime media. She gets to talk to herself in Chobits, SEED Destiny, and as a guest star in Hell Girl.

It has become something of a Running Gag for her characters to be bad at singing, despite her actually being a successful singer and her most famous role being an in-universe Idol Singer. To date, she has released four albums (Garnet, Kokoro, Chara de Rie and 24 Wishes). The latter two are compilations from her anime roles.

She was married to fellow seiyuu Kōichi Yamadera but after six years of marriage, they divorced in 2018. Should not be mistaken for the gymnast of the same name

as of April 2019, and happens to be a Gamer Chick who streams herself playing Dark Souls. She also opened an Instagram account

Notable tropes related to her career

"Please stay alive, Rie. This is the last lesson I could teach you."