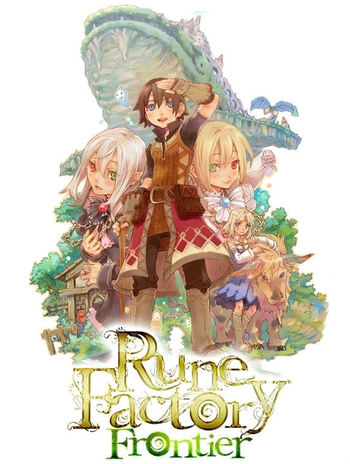 A familiar face in an unknown land...
Advertisement:

Rune Factory Frontier is a direct sequel to the first Rune Factory game and the series' debut on a home console. Unlike some were led to believe, this is neither a port nor remake.

Raguna, The Hero from the original Rune Factory, left Kardia in search of Mist and arrived at a border village called Trampoli. Turns out Mist moved there because someone's been calling out to her in her dreams. With Mist anchored in Trampoli for now, Raguna also decided to stay and keep an eye on her, doing what he does best; running a farm. But there seems to be some disturbance on Whale Island, a giant mass of land floating above the village; and he'll have to do something about it before that island loses its power and falls upon Trampoli right below.

Being the series' debut on a home console, Rune Factory Frontier is given an extended voice cast and more characterization for the characters. It also took a bit of a sharper turn to the comedic side than before; many Lampshade Hangings, humourous conversations and funny item descriptions are waiting around corners to make you smile. Long story short, RFF is a really smart and powerful update to the Harvest Moon formula, an attempt which yielded many things made right... except for one big flaw: a new and major game mechanic they added to the game horribly backfired.note The new "Runey System" meant for speeding up crop growth while supposedly providing extra challenge to maintain demanded excessive effort and attention; it didn't help that the consequences for neglecting it are too severe. So, despite the good intention, the price was that Rune Factory Frontier essentially lost the spirit it was originally intended for; taking things slow and steady, and enjoying your progress. Even so, if you can manage to work around it, RFF is a really fun game for veterans and newcomers alike.