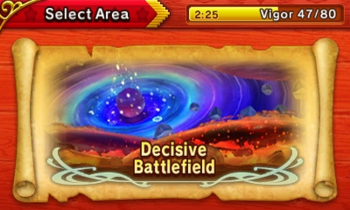 "This door just screams endgame."
— Shiki, The World Ends with You
Advertisement:

Where It All Began is a particular type where the final dungeon has some connection to — or in some cases even is — the spot where the game started. If the player can visit the final dungeon before the endgame, it's a Final Dungeon Preview. Can naturally be combined with Storming the Castle or Amazing Technicolor Battlefield. Compare and contrast Bonus Dungeon, an optional location that tends to be the only place that rivals the VDFD in terms of danger, and the Brutal Bonus Level, a Bonus Dungeon that most definitely will be more dangerous and challenging than the VDFD. For the exact opposite of the spelunking spectrum, see the Noob Cave. Beware of fake outs by the Disc-One Final Dungeon!

And if a game allows players to continue upon dying... that feature will often cease to be available once they enter the VDFD!