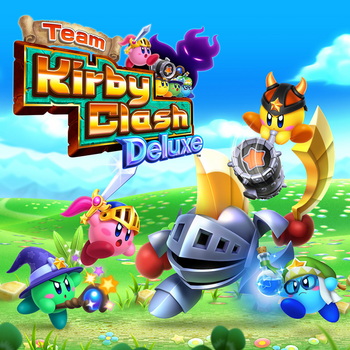 "This is a story of a faraway realm from long, long ago... A beautiful, peaceful land called the Dream Kingdom. Peace, though, can vanish in a flash... Can you defend the Dream Kingdom from a sudden onslaught of enemies? Set forth and do battle, Team Kirby!"
— Opening
Advertisement:

Team Kirby Clash Deluxe is a spinoff game from the Kirby series for the Nintendo 3DS. As the name implies, it's the "deluxe" version of Team Kirby Clash, a Mini-Game mode included in Kirby: Planet Robobot. It was released in April 12, 2017 in North America, and April 13, 2017 in Japan and Europe. It is free to download, but it also features microtransactions that will help you with progress in the game.

As in the original Team Kirby Clash, players can assume one of four roles:

Just like in the original Team Kirby Clash, up to 4 players fight various bosses under a time limit and gain experience and Character Levels to increase their abilities. New to this game are "Equipments", alternate weapons and hats that you can purchase and use to strengthen the Kirbys, Fragments obtained from bosses that you can use to buy rarer equipment, as well as Gem Apples that you can gain from either completing achievements, harvesting them from the Gem Apple Tree, or purchasing them with real money. Battles now run on a stamina system called Vigor, which, if depleted, can regenerate by either waiting for a few minutes or eating a few Gem Apples. Leveling up will also replenish the Vigor to full. Players can also acquire other players' Kirbys and bring them into battle with the StreetPass feature, or search for Kirbys online with the "Wandering Adventurers" option, marking the first instance of online interactivity in the series. amiibo is also supported, granting Fragments for scanning various amiibo.

The story progression is expanded from the original: whereas the original game has six quests, now there are six areas, each hosting as many as 8 bosses, the tougher of which you have to unlock by spending Gem Apples and/or beating the harder "Ordeal" bosses; doing the latter also unlocks new areas and quests, and lets you purchase better gear.

A Nintendo Switch version of the game titled Super Kirby Clash was released on September 4, 2019, considered the "definitive" version of Team Kirby Clash Deluxe. Super introduces an overhauled Story Mode that puts the parallel counterpart of Kirby's original foe Nightmare in the spotlight, and adds a slew of new Quests, new bosses to challenge, new equipment, and new music. In addition, Super adds Party Quests which can be played solo or with up to three friends in local and online multiplayer modes.