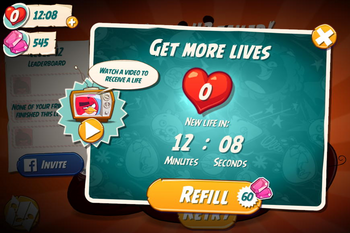 Hope you've got your wallet on hand.
Many Allegedly Free Games have some sort of limitation intentionally added or sweet perks to entice players into spending money. Unlike the usual method of offering special premium items and/or characters for you to use (yet nefariously, these systems run in tandem with one another), the Freemium Timer limits how much a player can play a game over a given period, unless they are willing to pony up one of their precious game credits, or watch an ad, to extend their playthrough. This is either to monetize off of impatient players, or as an Anti Poop-Socking mechanic.
Advertisement:

Freemium Timers can manifest in two different ways, although many games employ both mechanics at once:

These systems started life out in those Flash-based Facebook games from the late 2000's, and when the Mobile market became viable enough for gaming on the go, these systems spread to the mobile market like wildfire. Not surprisingly, most addicts attribute their long playtime for their game of choice to constantly emptying the Energy Bar or resetting the timers over the actual intended gameplay experience, due to them timing their lives around these timers. As such, detractors of these systems have coined the terms "Free To Wait" or "Wait to Play" games; games that are intentionally designed with abusing these systems in mind, so as to maximise the full profiteering potential.

Despite the name, these systems are not limited to Free to Play games, as many full-priced retail games also use these mechanics (much to the increasing ire of players everywhere). Often overlaps with Play Every Day, as these timers' duration generally take less than 24 hours to finish, or refill fully in the case of the energy meter.

Games that use the Energy/Stamina bar:

Games that use individual timeout timers:

Games that combines both mechanics: