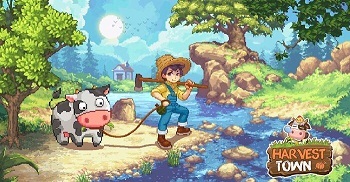 Harvest Town is a mobile Farm Life Sim developed by QY Games, and is currently in Beta.

The player starts as an aging individual who have lived the past few decades of their life in a foreign city. Disillusioned by their current circumstances, the protagonist begins to reminisce about their hometown—the fresh smell of the grass, the delicious milk it provided...

Overcome by nostalgia, the disheartened protagonist regretted ever leaving the countryside, and wishes for a second chance in which they would have stayed back instead.

Their wish is granted, and the protagonist awakens to find themselves back in their hometown, as a youth once more. Excited, the player is determined to use this opportunity to rebuild their deteriorating farm and carve a better future in the titular Harvest Town.

Tropes applicable to this game: