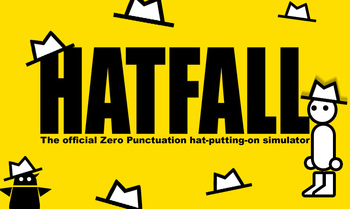 Without a doubt, the greatest interactive hat-putting-on simulator ever devised by man.
YOU HAVE NO HAT
RECTIFY THIS MATTER

Hatfall is the official Zero Punctuation game, developed by the series creator Ben "Yahtzee" Croshaw, with QA and porting done by Addicting Games, for browsers and mobile devices. It can be played Here.

As the title implies, hats are falling from the sky. Yahtzee needs hats. Problem is, dozens of identical jerks are getting in his way, and other things are also falling from the sky, so your job is to ensure that Yahztee is under the right spot before the hat reaches the ground. Your acquired hats can be used to buy more NPC types and stuff to put on Yahtzee's desk, some of which may not actually be permanent, but will give you an opportunity to get more hats.

A sequel, Hatfall 2: Fedora the Explorer is currently in the works

INCOMING TROPEFALL
GET IN POSITION: