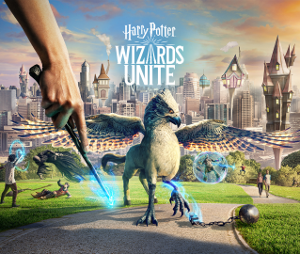 Harry Potter: Wizards Unite is an Augmented Reality game developed for mobile devices by Niantic. It is published by Warner Bros. Interactive Entertainment under its Portkey Games subsidiary, which is dedicated solely to games "inspired by" this universe. Similar in style and gameplay to Pokémon GO and Ingress, Wizards Unite has players take on the role of volunteers in a Ministry of Magic task force. Their mission? Get to the bottom of a massive conspiracy that threatens the Statute of Secrecy and will lead to the exposure of the wizarding world to Muggles across the world. Said conspiracy involves the theft of objects, creatures, and even fellow wizards (called foundables), which are randomly scattered across the world and guarded by potent magical guardians in the form of wizards or monsters (called confoundables).
Advertisement:

On November 2, 2021, the development team announced