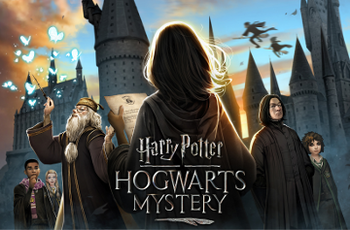 Harry Potter: Hogwarts Mystery is a 2018 mobile point-and-click Adventure game created by Jam City for iOS and Android, inspired by J.K. Rowling's Wizarding World between 1984 and 1991. The game is published by Warner Bros. Interactive Entertainment through its subsidiary Portkey Games, which is solely dedicated to creating games set in this universe. The game is not considered to be a canon installment of the franchise.
Advertisement:

Your 11-year-old self receives your owl to Hogwarts. There's just one problem - your older brother Jacob is missing and may have gone in search of the mysterious Cursed Vaults rumoured to be deep in Hogwarts. Over the next seven years, you will hone your magical skills, make new friends, and gather clues to find out what has happened to your brother...if he's still alive.