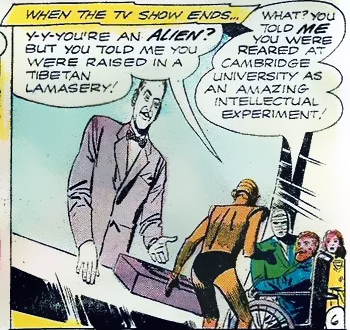 Three conflicting origin stories, and none of them is the truth.
"What is it with you? What made you what you are? Girlfriend killed by the mob, maybe? Brother carved up by some mugger? Something like that, I bet. Something like that... Something like that happened to me, you know. I... I'm not exactly sure what it was. Sometimes I remember it one way, sometimes another... if I'm going to have a past, I prefer it to be multiple choice!"
— The Joker, The Killing Joke
Advertisement:

Have you noticed that some characters have different origins when different people are writing the story? Sometimes this is done on purpose, to give an air of Unreliable Narrator. Sometimes it's caused by repeated retcons. Sometimes it's just because the writers got it wrong, sometimes the result of a deliberate retcon, rewrite or by creators Armed with Canon. This trope is particularly common in comic books, as a single character may be written by dozens of writers over their history. Sometimes, as evidenced in the Trope Namer, it is also done in order to depict the character giving his/her backstory as being too insane to give a true account of their past, believing every single account they gave about themselves; or to cultivate an air of personal mystery, a common play by a Consummate Liar. Having messed-up memories due to a case of Laser-Guided Amnesia that isn't so laser-guided, Trauma-Induced Amnesia, and/or implantation of Fake Memories also works just fine.

Video Games occasionally invoke this as part of a starting conversation to decide what your basic character build will be like, which may be the first part of Story Branching. Other games make you play through one of several origin levels before the story proper begins — this is known as Multiple Game Openings.

Along with multiple authors, this is a feature of the earliest recorded myths, making it Older Than Dirt.

Compare Broad Strokes, Comic-Book Time, Continuity Snarl, Depending on the Writer, Expansion Pack Past, Negative Continuity, and Origins Episode. Sounds similar to but has nothing to do with Multiple-Choice Future.

open/close all folders
Anime and Manga
Audio Play
Comic Books
Given that multiple reboots and sliding timelines are so endemic to DC Comics and Marvel Comics in general, almost every legacy comic-book character has this to some extent or another.

Example of:
Riddle for the Ages