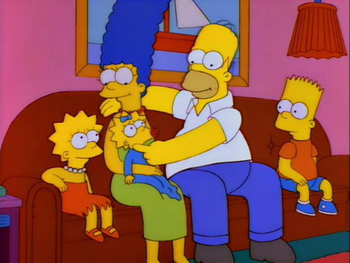 During one of Marge's self-imposed, weekly family hours, the Simpsons are looking through the photo album. The kids notice that the album doesn't contain any pictures of Maggie, which prompts a Whole Episode Flashback about the events leading up to the youngest Simpson's birth.

Some time in the last two years, Homer has finally saved up enough money working at the Springfield Nuclear Power Plant to quit; he does so grandly, mocking Mr. Burns and even burning up a wooden bridge as he drives from the building. He then gets his "dream job" at Barney's uncle's bowling alley, explaining to Marge that he's worked out a budget that will allow the family to get by so long as nothing unexpected happens. To celebrate, Homer and Marge have a romantic evening together...

In a few weeks, Marge is suffering from morning sickness, and a visit to Dr. Hibbert reveals that she is pregnant. While she quickly tells her children, she's much more reluctant to share the news with Homer, especially after he thanks God for his life being perfect just as it is. Instead, Marge turns to her sisters, who are delighted to hear the news—and even more delighted to learn that Homer would be devastated if he found out about the pregnancy. Marge makes Patty and Selma promise not to tell Homer; instead, they call up the biggest gossips in Springfield, who are quick to spread the word. The Bouviers then arrange a baby shower for Marge right before Homer gets home from work. He finally pieces together what's happening, and throws a screaming fit.

Later that evening, Marge and Homer discuss the future: Homer knows that he can't possibly support a third child on his bowling alley paycheck. Marge suggests that he ask for a raise, and while his boss is willing to give it, the alley isn't making enough money to provide for one. Homer then tries to drum up business by wildly firing a gun outside the building and shouting at passerby. This plan fails, and also costs him his dream job. A reluctant Homer knows that there is only one place where he can find work, and goes back to the power plant. Mr. Burns decides to humiliate Homer even further by installing a bleak plaque above his old workstation: "DON'T FORGET: YOU'RE HERE FOREVER." Devastated, Homer returns home and complains to Marge, who tells him that she's begun having contractions.

At the hospital, Dr. Hibbert works to deliver the baby as Homer, still depressed, comments on the miracle of "another mouth." Even the child's birth can't rouse his spirits...until a tiny hand reaches out and grabs his thumb. He looks down at Maggie and immediately loves her, taking her into his arms and declaring her "the most beautiful baby girl in the whole world." While he and Marge kiss, Maggie, feeling neglected while mimicking them kissing, reaches off-screen and discovers a familiar pacifier.

Back in the present, Lisa is thrilled to hear that the story has a happy ending, but Bart is confused: Homer still hasn't told them why there aren't any pictures of Maggie in the family album. Homer explains that there are plenty of pictures, and that he keeps them "where he needs the most cheering up." The episode cuts to a shot of Homer's workstation, where the walls are plastered with dozens of photos of Maggie—along with the plaque, where they have been arranged to cover the letters to form a new message: "DO IT FOR HER."

This episode contain examples of:

Mr. Burns: According to company policy, it's now customary to give you the plague.
Smithers: Uh, sir, it's pronounced "plaque".