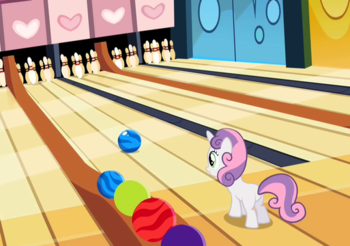 How do they bowl without hands?
Advertisement:

Ah, bowling! The sport of the common man. Generally when TV shows portray someone as an everyday Working-Class Hero, the writers make him a member of a bowling team. Could result in just references to a team, a singular bowling episode or a chance for a character to be Bested at Bowling. Trope name is a parody of Bowling for Dollars, a syndicated American Game Show format of The '70s.

Bowling reached its peak popularity in the 1950s, when professional bowlers earned salaries rivalling those of football or baseball players. Bowling allies often have a snack bar and a liquor license, which helps boost the social aspects of league play. Often produce drama via a 300 scoring 'perfect game'. Other forms include lawn bowling, called Bocce in Italy.

Sometimes, a Canadian series will have that country's distinctive five pin variant: five pins with rubber rings around the wide bottom and smaller balls with no finger holes. But neither Canada nor the United States will ever show any other type of bowling (sorry, candlepin and duckpin lovers).